This past weekend London, Ontario enjoyed back to back dance events on Friday and Saturday November 29 and 30. Here’s a quick look at how it went down!

First up, we’ve got a short (15 second) clip of our very own b-boy Kayo back peddling his way into a clean power combo.

The above Instagram video was taken during Western’s 2013 Fall Cypher, which had plenty of UWO Breakers on hand but also brought in competitors from Waterloo and Buffalo, New York. It was the first time I’ve been to an event hosted in the Physics & Astronomy building (lower atrium) and I wasn’t disappointed! 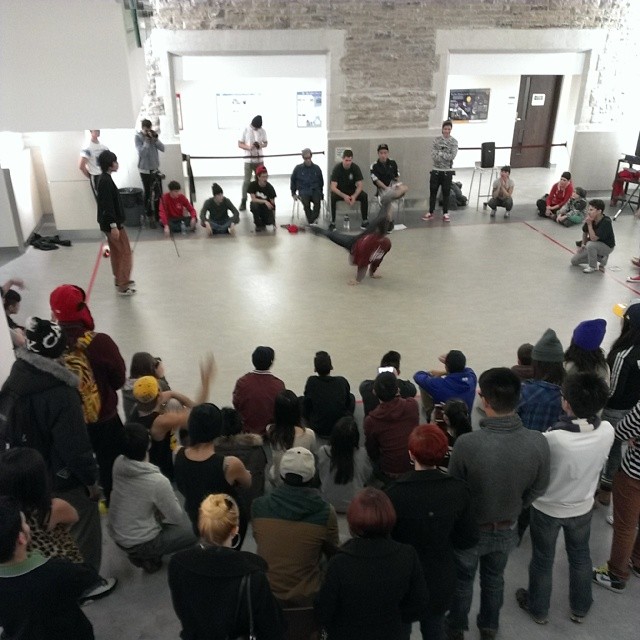 The crowd watching the 2 on 2 breakin’ battles

Ill at Will showed up in force to support and represent in both the battles and the general cyphers. Congratulations to JFX (ill at will) for winning the All Styles competition for the 2nd year in a row! Congrats also goes to Kayo (ill at will) & Ju Rock (Ground Illusionz) for winning the 2 on 2 breakin’ competition! Here’s an Instagram video of Kayo & Ju Rock in the semi-finals:

Special thanks to the UWO Breakers for throwing the event and DTWB for the fine track selection as he was DJing. Here is a recap video courtesy of Khang Ha of Flip Pictures:

The following night O.N.E. Dance Studio hosted their 2nd annual dance-driven, charity-supporting, fun-filled Movembreaks jam! It was great to have choreo dancers, freestyle dancers, breakers, house dancers, and more all jamming in the same circle. By the power of their moustaches and many generous donations, Loebz (ill at will) and DTWB (the DJ!) raised over $1000 for prostate cancer and mental health awareness!

So much talent, passion, positive energy, and inspiration was exchanged and we THANK YOU for making this all possible.

Awards were given out to recognize individuals who have been putting in work, supporting, repping hard, and being a positive element in the scene. Big ups to those that received recognition; you all deserved it! Congrats Angela E, Joseph Y, Jordan B, Matt H, Malcolm H, and Shanonn P!

There was also a surprise performance and some freestyles by local MCs Bill Beamin and Mike Sea toward the end of the night.

Special thanks to our maestros Jon and Woody on the drums and turntables, respectively. You guys delivered the fire and kept the vibe hot all night long! You can get a glimpse of what I’m talking about in this next clip:

What a rare treat it was to have 2 breakdance events in 2 days in my home town! At the risk of sounding old I want to point out that back in the day London bboys always had to travel if they wanted to compete because London jams happened maybe once a year. It’s great to see the scene come so far.